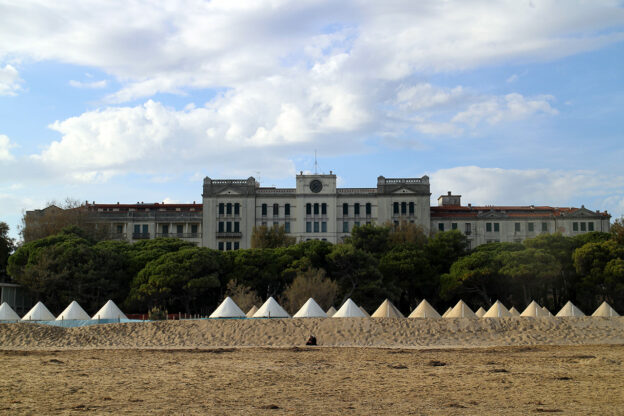 This city never gets boring for me. I’m in and around Venice almost every year, I‘d almost call it something like a second home.

Venice‘s Lido is among my favorite places in the area. Almost every time I’m in Venice, a visit to the large, stretched out barrier island is on my list. I like the calmness of the island, just about 10 minutes away from the busy and crowded old city of Venice by vaporetto. Not a lot of tourists come to the Lido island.

An island for the Fin de Siècle elites

Speaking about an „island“ to someone, who has never been there, might be confusing. It‘s actually a flat, very narrow and long, yet monotonous barrier island, that protects the Lagoon from the tides of the Adriatic Sea. Arriving on the island at the town port of Lido and walking over to the sea side is always a highlight of every Venice stay for me. Leaving the old city behind to enjoy looking onto the open sea, be it summer or winter.

It fascinates me that in this place, in the Fin de Siècle era (at the end of the nineteenth century), European beach tourism and holidaying was „born“.

Nineteenth century writers and poets wrote about the Lido and made it an attractive destination for the European elite. The traces of this epoch can still be seen today: a big boulevard traverses the island, leading from the small port to the beach, were old hotel buildings line up and tell tales about long past times.

One of the biggest, old hotel buildings can be found right at the beach side next to the boulevard: Grand Hotel des Bains.

The view of the hotel is amazing. It‘s a huge building, about five storeys high and exceptionally big. The hotel overlooks the beach of Lido and can be seen from far when walking on the beach.

Grand Hotel des Bains was opened in 1900, to attract wealthy European tourists. Today, not much of the past glamour remains. The hotel was closed in 2010. Plans to renovate Grand Hotel des Bains and turn it into a luxury apartment residency failed – the place has been abandoned since more than 10 years. Today, it looks like a sad ruin, but you can still guess its past glamour.

Even though I already used to walk by the place as a kid, when visiting Venice with my parents, it was not until I grew up, that I really discovered the meaning of Grand Hotel des Bains.

Visconte‘s movie is a masterpiece to me, that matches the mastery of Mann‘s novel perfectly. It could not have been shot at a different location than Grand Hotel des Bains.

A place where time stands still

For me, the abandoned hotel on Lido reflects the morbid, decaying, yet timeless nature of the city of Venice in an almost perfect, kitschy way. Decades and centuries pass but leave the city unimpressed. Almost nothing changes here, and if so, with dignity.

Venice is timeless. But maybe that‘s because decay, death and transience have been an integral part of the city forever. It‘s one of the reasons why I love to come back here every now and then. 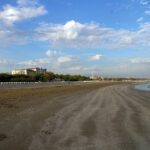 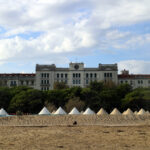 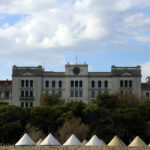 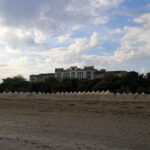 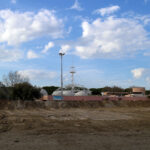 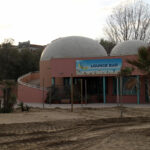