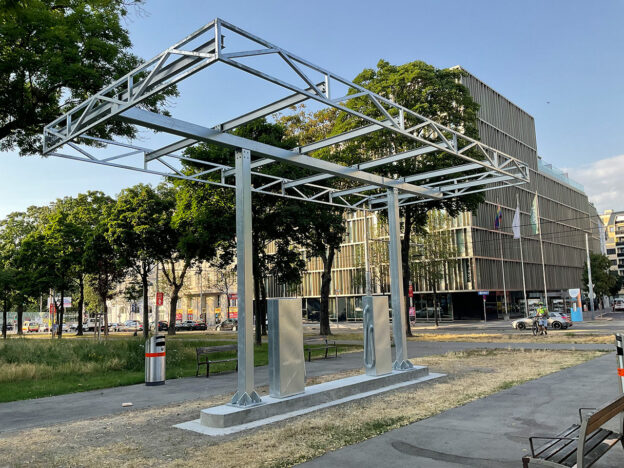 When commuting from work to my home by bike, I usually pass the „Gürtel“, one of Vienna‘s big ring roads. It‘s a traffic hell, separating downtown Vienna from the suburbs.

In the particular place that I take by bike, some wasteland meadows are located between the two roads of Gürtel. The place fascinates me: It‘s as loud and polluted as it can get in the city, yet – between all the noisy cars, it‘s a remarkably relaxed place. Even with „urban wildlife“, living in the meadows that get mowed rarely. Kids, playing ball games in one of the fenced football pitches also belong to the scene, as well as some people who live in the neighborhood around the corner and kill some time next to the thunderous traffic.

Alien in the urban wasteland

When I recently passed the place again, I noticed some fancy cocktail tables and artsy crowds standing around at one of the paved junctions in the meadows between the roads. I realized that a „vernissage“ was taking place – the opening event for a new sculpture, that I didn‘t even notice at first.

The sculpture resembles a rather abstract and simplified petrol station. Two shiny petrol pumps with metal surface stand in the middle of this „non-place“, engulfed by the sea of car and city noise. I think, it fits the place perfectly: One tends to overlook it in the first place, because it seems „native“ to this urban traffic hotspot. Yet, on second look it seems displaced and alien, because of its texture, its uselessness and the surrounding urban wilderness. In Viennese, we call places like this „Gstettn“ – run-down suburban non-places.

Later, I did some research online and found more information about this sculpture named „Tanke 24/7“ by artist Toni Schmale at a site dedicated to art in public spaces of Vienna. I particularly like the artist‘s poetic thoughts about the sculpture:

„I longed for sound protection walls and dreamt that gas would just run out, that all cars would break down and the Tanke would be overgrown with wild meadow flowers of the Wienerwald, that my friends would suddenly turn up and we would have an after-work beer.“

The site gives some insights into the artist‘s thoughts for the sculpture.

Relic of the past (from the future)?

I would like to add my own associations: We‘ve been going through one and a half years of a weird dystopia (kind of), and we‘re on the verge of a big shift in transport, traffic and the definition of urban spaces and of living and working. Tanke 24/7 gave me the feeling of visiting an eerie relic of our times – ahead of time.

I‘m dreaming of a time, when dysfunctional petrol stations are only left as a reminder of past times. And maybe the artist shares this dream?

„I know this strip of grass from speeding by, sitting in a car heading out of town to the hardware store on Matzleinsdorfer Platz or crawling back down the Gürtel. Most dominant and memorable is the roar and thunder of the cars. Let’s just meet at the Tanke – the garden pavilion disguised as a dysfunctional gas station, with nothing to consume except what you bring yourself.“ 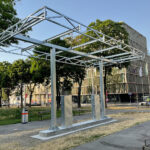 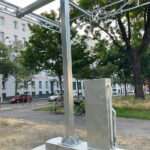 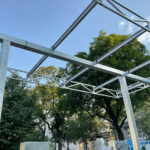 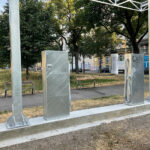 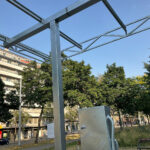 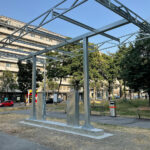