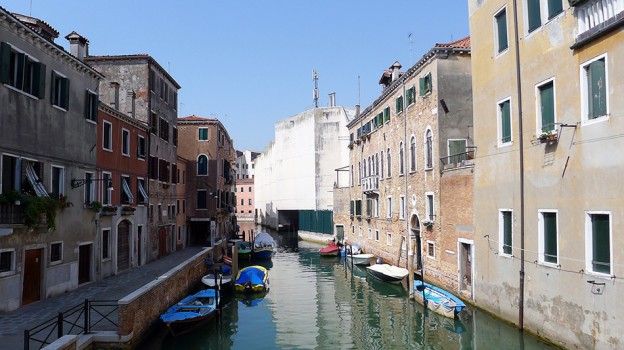 Tucked away behind some regular, old and venerable Venetian houses, not far away from the jetty and the sea on one side and to Arsenale on the other side lies a different sort of Venetian building. It looks like an alien object between all of the traditional old buildings and the colorful boats. An alien whose reflections on the water of the canal disturb the view in a strange way.

I have been to Venice countless times. I used to go there with my parents quite often when I was a kid and fell for the city. I have been there at least almost every two or three years since then. The city can basically be described as one big open air museum and a place that is all about conserving and celebrating past times in a kind of morbid way.

These omnipresent cliché images sometimes entirely conceal other aspects of a place. That’s one thing that I was reminded of when I discovered the Palasport Giobatta Gianquinto or Palasport Arsenale in the summer of 2013.

We were walking down some Venetian Calle coming from the Biennale 2013 expositions at Arsenale when I noticed this odd looking, concrete building standing out from the other old Venetian buildings. I discovered it by coincidence while we were passing a bridge over the canal close by. The building immediately caught our interest and we approached it to take a closer look. We were lucky enough to enter the building through one of the unobtrusive doors. It turned out that the building (obviously built around the 1960s) houses a gym and sports venue of the community of Venice and was temporarily being used for the Lithuanian Pavillion at the 2013 Biennale.

The building with its rough, concrete architecture, its vast multi-storey maze of dark, claustrophobic corridors and its huge sports halls, partly below the Venetian sea level fascinated me. I would never have thought to discover such a “normal” and down to earth yet at the same time mysterious place there. The discovery reminded me again of how easily one tends to get dazzled by stereotypic images and preconceptions of a place. 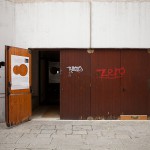 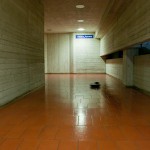 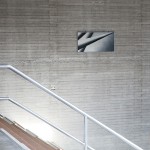 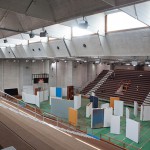 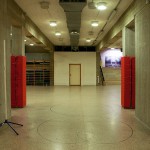 The images in the image gallery are courtesy of the Lithuanian Pavillion, Biennale 2013 at Palasport Arsenale.